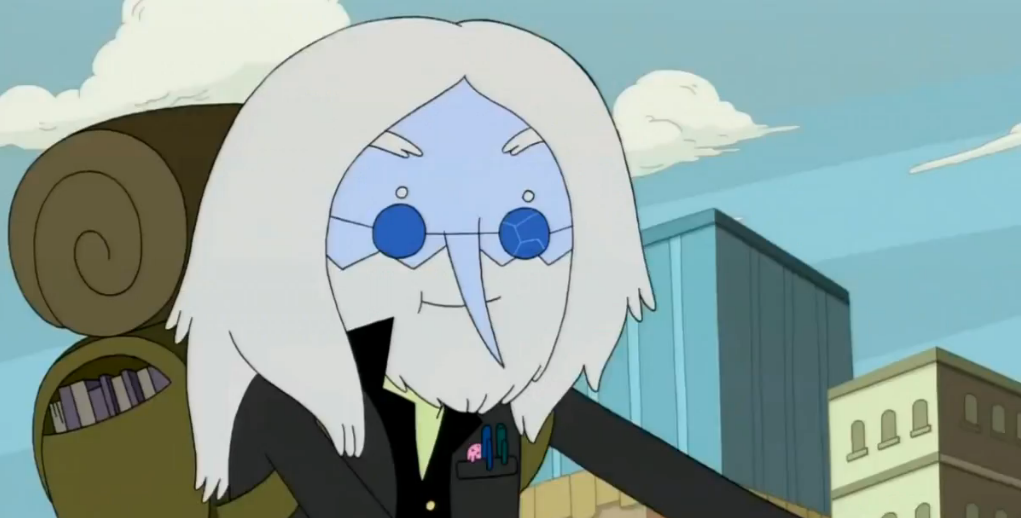 Some Observations Regarding Simon Petrikov

By John Shutt and Thomas Shutt

The “Christmas special” is a meta-genre of television that spans every format, from sitcoms and variety shows to crime dramas and cartoons. They are typically one-offs that have little effect on the course of the series. Like the holiday itself, the Christmas special exists in a temporal bubble, airing only once per year if it even repeats at all. The expectations set by the format – that nothing of significance will happen plot-wise, and that the mood will be light and cheery – are brilliantly harnessed and subverted by the Adventure Time team in the two-part season three episode Holly Jolly Secrets. The lighthearted battle between series protagonists Jake the Dog and Finn the Human and their bumbling comic antagonist the Ice King is turned on its head by a sudden, tragic message from the past: The “evil secret” that Finn and Jake are hunting for in the Ice King's video diaries turns out to be his origin as Simon Petrikov, an antiquarian who was driven insane by a cursed magic crown. In a stunning two-minute burst of information, viewers learn that the Ice King's madness is inextricably tied to his survival, since the crown's magic allows him to outlast an apocalyptic event and unnaturally prolongs his lifespan. Viewers also learn that the Ice King's obsession with kidnapping princesses stems from the loss of his fiancée, Betty, who we are led to believe was driven away by something he had said or done while in a crown-influenced fugue state. This addition to the episode was a last-minute decision, yet it hugely impacted the course the show would take from that moment onward.

Studying how Holly Jolly Secrets performs this tricky artistic maneuver, and the influence of the newly revealed “Simon Petrikov” character on other characters in the series, reveals the importance of music in Adventure Time's storytelling. The musical style shifts dramatically when the final video diary entry begins playing: We move from cheery, video game-inspired electronic music, which grounds us in the “present” of Ooo, to an eerie piano melody, which places us in the distant past. This is the first signal to the viewer that something unusual is going on. The second signal is also an audio cue, as the man in the tape begins to speak. Simon Petrikov's voice is just close enough to the Ice King's to be uncanny, matching the unsettling tone of the background music and slightly delaying the viewer's realization that the two characters are the same. Without these subtle audio clues to destabilize the viewer, the rapid change in tone would probably be confusing and ineffective.[1]

Music is not only a means for the viewer to understand what is going on in Adventure Time; it is also one of the primary ways for the characters to understand their feelings and decide what to do in difficult situations. In the season one episode Freak City – the first episode to use this story pattern – Finn uses song to break through his depression after being turned into a giant foot by Magic Man, a sort of trickster god figure wandering Ooo:

Is this really my life,

Is this how my story ends?

Being in this body

Maybe I should lay my head down slow,

And sleep until it's all over

Is this end of the hero boy named Finn?

And win it, to win it

And spit on it, and kick it

Life can just go eat it

Cause this is a man's game

Many episodes of Adventure Time feature diegetic music written and sung by the characters as they work through emotional challenges, including It Came from the Nightosphere (S02E01), What Was Missing (S03E10), Incendium (S03E26), Dream of Love (S04E04), Princess Monster Wife (S04E09), I Remember You (S04E25), Lemonhope (S05E50 and S05E51), The Tower (S06E04), Breezy (S06E06), and Little Brother (S06E11). It is not a coincidence that this list includes some of the most important episodes in the series in terms of overall narrative structure. The emotional and psychological growth of the lead characters drives the multi-season storylines of Adventure Time, and episodes that focus on this side of things often include one or more songs. If a viewer were to pick out just the “mythology” episodes of the series and play them in sequence, the show might appear to be a musical.

In the world of Adventure Time, strong emotions have literally magical powers, which can be embedded in articles of clothing,[2] in poetry,[3] or in song. For the Ice King, music may be the only meaningful connection to the man he was before he put on the cursed crown. In addition to studying ancient artifacts, Simon Petrikov is a musician. He carries drumsticks with him as he wanders the wasteland created by the Great Mushroom War, and still keeps a drum kit in his frozen castle after his full transformation into the Ice King. In the crucial season four episode I Remember You, a song composed using Simon Petrikov's anguished and panicked notes as lyrical inspiration allows the Ice King to reconnect with Marceline the Vampire Queen, who Simon/The Ice King[4] protected when she was a young girl. While improvising on their drum kit and bass guitar, they sing together:

Marceline, is it just you and me in the wreckage of the world?

That must be so confusing for a little girl

And I know you're going to need me here with you

But I'm losing myself, and I'm afraid you're going to lose me, too

This magic keeps me alive

But it's making me crazy

And I need to save you

But who's going to save me?

Please forgive me for whatever I do

When I don't remember you

Music is a key part of Marceline's identity, and in the season five episode Simon and Marcy, viewers learn that her love of music was originally inspired by her time wandering the wastes with Simon.

Simon and Marcy is remarkable for making Adventure Time's most explicit reference to another television series, when Simon sings the well-known theme song to the sitcom Cheers. He sings it on two occasions: Once when putting on a one-man show to entertain Marceline, and once to try to remember who he is as he puts on the crown and the Ice King personality takes over. The Cheers theme provides a strong emotional connection to the world before the Great Mushroom War and a small amount of magical protection from the amnestic effects of the crown. In the final stages of his psychological deterioration, the Ice King can only get in touch with the Simon aspect of his personality through song. The last vestiges of his former self are scribbled on receipts, take-out menus, and newspapers, but the caring and sentimental affection contained in those scraps of ephemera remains extremely powerful.

Adventure Time's pattern of characters using song to break through emotional barriers and drive the plot forward is demonstrated most blatantly in season three episode What Was Missing, in which Finn, Jake, Marceline, and Princess Bubblegum can only open a magical locked door by writing a song that expresses their genuine feelings. Their first attempt at a song fails, but the door nearly opens when Marceline vents her complicated feelings about her estranged friend, Princess Bubblegum:

Is that what you want me to do?

Sorry I'm not made of sugar

Am I not sweet enough for you?

Is that why you always avoid me?

I shouldn't have to justify what I do

I shouldn't have to prove anything to you

I'm sorry that I exist, I forget what landed me on your blacklist

When the door is nearly open, Marceline retreats to simpler lyrics that mask her true feelings, breaking the spell. The door remains closed until Finn improvises a similarly revealing song, with the coda:

I'm gonna sing a song to you

And I refuse to make it fake

I'm gonna sing a song that feels so real

Hidden behind the door is each character's most treasured possession. The most interesting for our purposes is Princess Bubblegum's lost item, a band t-shirt given to her by Marceline.

Two of the most powerful magical items in the series are indirectly created by Simon Petrikov, without any help from the cursed crown. One is a stuffed animal named Hambo that Simon gives to Marceline when they are traveling together in the wasteland after the Great Mushroom War. The other is Princess Bubblegum's band t-shirt, which wouldn't exist if Simon hadn't passed on his love of music to Marceline. Later-season antagonist Maja the Sky Witch spends years hunting down each of these items to use as power amplifiers for potions, and the power imbued in Hambo allows Simon to open a portal through time in the season five episode Betty. Simon Petrikov is arguably a more powerful wizard than his alter ego the Ice King, though Simon views things through a more scientific lens.[5]

Music is a bridge, a way of communicating when simple words are not enough, and it is often described as a universal language. Universal among different places, yes, but also through time. Simon inspires Marceline to become a musician over the course of a thousand years, and Marceline’s own friendship with Princess Bubblegum is embodied in the band t-shirt she gave her. The Ice King carries the memory of music with him from before the Great Mushroom War up until the present day, and its presence in his life continues to heavily influence the lives of those around him.

Like the Cheers theme that Simon Petrikov sings inside a broken television set, artifacts from the 1980s and 1990s are scattered throughout the background of the world of Ooo. That was the time of the writers' childhoods, and their creative influences still stem from the shows they watched and games they played back then. As show creator Pendleton Ward said in an interview when asked about the apparent weirdness of the show,

In general, it’s not weird to us. It comes from a really genuine place. I grew up watching Ren and Stimpy and Beavis and Butt-Head, and playing Dungeons and Dragons. So all of those elements feel really natural to me. They don’t feel bizarre to me, to write about magic, to write about strange creatures. It all feels right out of my childhood.[6]

In another interview he says,

It's just kind of pleasant to do stuff like this, to rattle off shows you remembered as a child. And I think about the kids who are going to grow up and be in college and rattle off Adventure Time in their list of all the cartoons they grew up watching. And that's really satisfying to me.[7]

The creators of Adventure Time quietly pass on the influence of those shows from their childhood to young viewers today, and the effect will be felt in future generations of animation. The impact compounds and spreads over time, like Simon teaching Marceline to sing.

In the Rolling Stone profile of Pendleton Ward that confirmed he had stepped down as showrunner of Adventure Time, the writer of the article observes that Simon Petrikov wears glasses that look exactly like Ward's.[8] It seems assured that Ward's influence on Adventure Time and its viewers will be as long-lasting as Simon's influence on the world of Ooo. What appear to be scraps of cultural ephemera – a receipt with a poem scribbled on it, a beaten-up stuffed animal, a band t-shirt, a sitcom theme song, a Christmas special, or a children's cartoon – can have a power that is felt for generations.